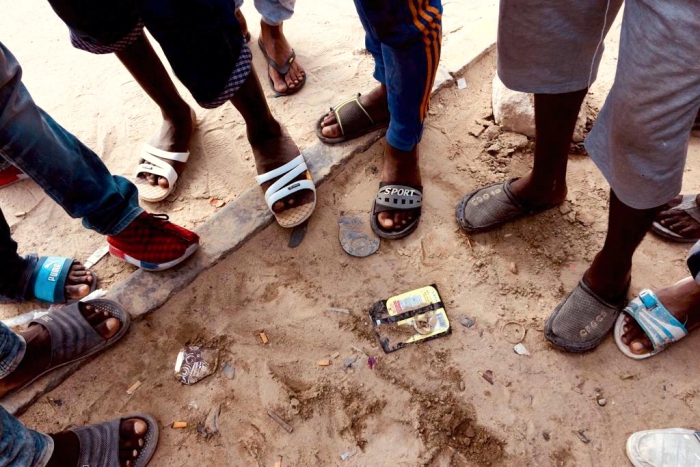 They are always there. On the road that goes from the monolith with a seahorse – the symbol of this city – to a mosque that the war left in ruins before it was even built. It is enough to greet any one of those who wait on the roadside for work in construction, cleaning, or anything, and a circle is formed in a matter of seconds.

After several years of working with migrants on my way to Europe, I’ve come across all kinds of profiles: from those who know the exact distance between their village in Congo and Paris, to those who are amazed with the immensity of the Mediterranean after seeing the sea for the first time. “I never thought such a big river could exist” – I swear I heard this from a rescue boat.

So, one of the objectives of this coverage in Libya is to know to what extent these people know the situation in the central Mediterranean. Do they know that Italy has closed its ports? Have they heard of Salvini? Has anyone told them that the rescue fleet is no longer there, or barely there, and that there is a powerful Libyan coast guard in its place?

Emile says he knows everything, but he has not seen what he has seen to return home now. Staying in Libya is not even mentioned, it is not an option for anyone. Since leaving home in 2015, this 21 year old boy has crossed Equatorial Guinea, Senegal, Gambia, Mali, Algeria, Morocco..  He tried to cross in Tangier, on ferries, and then by boat to Ceuta. On the third attempt, the Moroccan police took him to a detention center in Casablanca with many others. Once free, and after ruling out the Moroccan route, he would try from Libya, to which he would arrive after returning to the Algerian desert. The desert is rough, says Emile, who studied administration. He’s good with numbers.

Returning to the desert, he tells us that from the back of a truck you see the dead and those who will be dead soon; People in the middle of nowhere who try to stop the vehicle to get on. But these things never stop until the engine breaks. Emile thought he was very lucky until the same thing happened to him. Hours later, someone in a van came to look for the driver, and he stayed there with the rest. In the middle of nowhere. He had five litres of water to share with four others like him; They endured a week that began with sips of water and ended with sips of urine. They tried to stop three trucks. They already knew that they would not stop, but they tried anyway.

They survived. The driver who had left them stranded returned with another truck, as if it were a car-broom for desert castaways. After that, Libya: two kidnappings by uniformed mafias from which he was left alive after paying the family the amount they asked for. The hawala – “transfer” in Arabic banking jargon – is a system that leaves no trace; a person accepts the money in deposit and a second pays the exact amount in another part of the world. When paid, the family of the abductee receives a code that has to be sent by SMS to the abductor. There is no migrant in Libya who has not used it.

Return home? Emile has already said that he knows who Salvini is, that there are no NGO’s and definitely many Libyan coastguards. But he will risk it at sea.

René, by his side, has not understood any of the story because the Ivorians like him do not usually speak English. “Salvini? No idea. Maybe another name would ring a bell,” he says in French, just before stopping a car looking for a small group. Only four fit, including Emile. Reflexes are essential to survival on the avenue of the seahorse. Keeping yourself busy with the journalist does not help, but some still think that talking to him can be useful.

“Do you have contacts at the UN?” asks a Cameroonian. His name is Daniel and has been limping since he was shot in the leg in Tripoli. I tell him the truth, that I do not have contacts at the UN. I don’t tell him that the UN is the one that backs the government and has converted people traffickers into the coast guards who will intercept him when he tries to leave. Then there will be more beatings, and having to start all over again from scratch on the side of the road. He does not know who Salvini is, nor do the Sudanese on his right.

Another truck fills up in a matter of seconds, but Hamid has not even budged. He meets the driver. Last week he climbed onto that same piece of junk to work all day in Bukamash, 30 kilometers from here. That son of a bitch promised him 70 dinars – about 10 euros – but was only paid 40. The worst was that he had to return to Zuwarah by foot at night. It took him six hours. It’s really nothing for a kid from Sierra Leone who endured daily beatings during the three months he was held captive. He had no one to call to send him money, but took advantage of a moment his kidnappers weren’t paying attention to escape.

Abdul has just arrived walking from work. He is covered in plaster dust, but it has not gone badly: they paid him what he had been promised and they told him that they’ll call him again. He was already an ace with plaster in Benin.

“Salvini has left us trapped in hell,” he repeats twice.

I explain to them that telling their story will serve to sensitize people that may cause a change in policies, but that it won’t happen overnight. Or anytime soon.

“When?” someone asks. This is also not a rhetorical question.